LAGOS – If the assurances by Ogbeni Rauf Aregbesola, Minister of Interior, are anything to go by, then, the nation’s building industry would be better for it, as the Federal Government has pledged to raise safety standards within the sector.

But, the feat would not be achievable without collaboration with all professionals within the nation’s building industry, partic­ularly, members of the Nigerian Institute of Building (NIoB).

Aregbesola, while hosting leaders of NIoB recently in his office in Abuja, had said that, the Federal Government would not leave any stone unturned towards attaining the vision of President Muhammadu Buhari, whom he said was keen on the safety of Nigerians.

According to Awobodu, that date was chosen because it was the day a five-storey building col­lapsed at No 63, Massey Street on the Lagos Island, killing over 20 people, who were mostly school children.

According to Awobodu, the Builders’ Day, which should be an annual event, would commence this year 2020. It would be a na­tion-wide sensitisation campaign against substandard building construction.

The NIOB thereby sought for the support of the Ministry of Interior to realise this objective.

Aregbesola, postulating the philosophy of placing preven­tion above damage control or medicine after death, added that his Ministry would collaborate with the NIOB to train artisans in building and also to ensure standardisation of all materials being used in building construc­tion so as to avert the frequent incident of building collapse across the country, which he said had claimed the lives of many Ni­gerians.

Ogbeni Aregbesola enjoined the Institute to help provide building skills at the correction­al centres where inmates could be engaged in more productive activities, as well as generating income for themselves and the country. 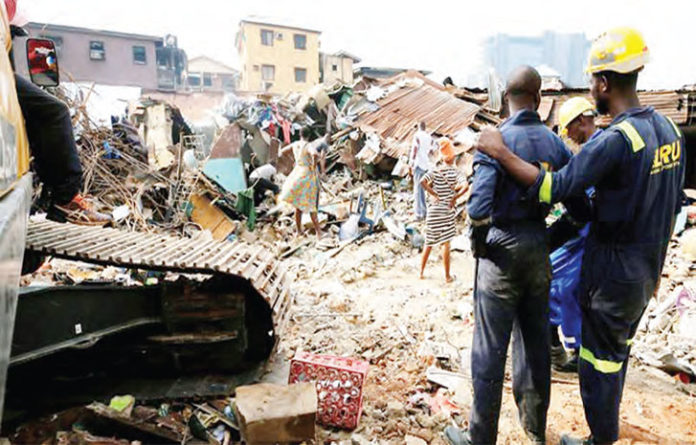 The minister further stressed, “Among the causes of massive unemployment and insecurity in Nigeria is the failure of people to recognise key primary service providers such as the building ar­tisans, so we are addressing this trend as part of our efforts at removing all threats to the secu­rity of lives and property of the citizenry,”

He called for training and re­training of artisans in the var­ious fields towards national de­velopment.

Considering the pragmatic approach to solving building col­lapse, the Minister commended Lagos State Government on its new building regulations that have assigned professional build­ers the responsibility of man­aging construction work at all building sites in the state. Such building regulations if made national should help the nation reduce the perennial crisis of building collapse.

On the issue of foreign build­ing personnel, Aregbesola, who promised to check quackery, as­sured that the immigration sec­tion of the ministry would ensure that the building expatriates coming into the country were duly registered with the Institute and licensed by the appropriate regulatory body, the Council of Registered Builders of Nigeria (CORBON). This should be a due process of reducing quackery and upholding professionalism just as was being done by the Ni­gerian Medical Association and Nigerian Bar Association.

The group in a text message, while reacting to two collapses that occurred in Lagos at both Agarawu, Lagos Island and at 12 Alasepe Street, off Community Road, Ago Palace Way, Okota in Lagos State.

At Gramz Investment and Asset Limited, we help individuals and corporate organisations, home and abroad explore the opportunities in the Real Estate sector by providing them with opportunities that will give them maximum return on their investment. In one statement, we can say we help them secure their future with viable and profitable real estate investments.
Check Out our Properties: https://gramzltd.com/our-estates/